Recently we have been helping SME’s increase their cyber detection capabilities, with some Open Source and freely available tools. In this post we briefly discuss Wazuh and Kibana dashboards using the ELK stack (Elastic Search, Logstash, Kibana) before walking through an installation of Bro IDS, and Critical-stacks free threat intelligence feeds!

Wazuh is a next-generation version of OSSEC a Host-based Intrusion Detection System (HIDS). It is already pre-configured with a number of transforms, queries and visualisations that can help you detect host based intrusions, monitor your compliance with CIS and other compliance programs such as PCI DSS and GDPR through additional plugins.

We followed the instructions from Wazuh here

The instructions are quite detailed and lengthy - but most importantly accurate! So we don’t feel like we have the need to repeat those same instructions here.

Once successfully installed you should be able to access Kibana and Wazuh at http://your_server:5601

So with our HIDS sucessfully installed, lets move onto the next step installing our NIDS!

BRO is an Open Source IDS project. Its relatively easy to install. But can be slightly complicated to setup with Kibana. We have tried several walkthoughs on the Internet with no success. So we decided to create our own installation and walkthrough so that others can easily follow and repeat our instructions to get up and running with minimal fuss!

Git is already installed by default on Ubuntu, so you can clone the repository with the following command. The files will be put into a directory named bro.

Change into the project’s directory.

Run Bro’s configuration, which should take less than a minute.

You’ll see a percentage completion at the beginning of most lines of output as it runs.

Once it finishes, install Bro, which should take less than a minute.

Bro will be installed in the /usr/local/bro directory.

Now you need to add the /usr/local/bro/bin directory into your $PATH. To make sure it’s available globally, the best approach to accomplish that is to specify the path in a file under the /etc/profile.d directory. We’ll call that file 3rd-party.sh.

Now that Bro is installed, we need to make some configuration changes for it to run properly.

In this step, we’ll customize a few files to make sure Bro works properly. All the files are located in the /usr/local/bro/etc directory, and they are:

Let’s look at what needs to be modified in each file.

Configuring Which Nodes to Monitor

To configure the nodes Bro will monitor, we need to modify the node.cfg file.

Out of the box, Bro is configured to operate in standalone mode. Because this is a standalone installation, you shouldn’t need to modify this file, but it’s good to check that the values are correct.

Open the file for editing.

Under the bro section, look for the interface parameter. It’s eth0 by default, and this should match the public interface of your Ubuntu 16.04 server. If it’s not, make sure to update it.

Save and close the file when you’re finished. We’ll configure the private network(s) that the node belongs to next.

The networks.cfg file is where you configure which IP networks the node belongs to (i.e. the IP network of any of your server’s interfaces that you wish to monitor).

To start, open the file.

sudo nano /usr/local/bro/etc/networks.cfg By default, the file comes with the three private IP blocks already configured as an example of how yours need to be specified.

Save and close the file when you’re finished editing it. We’ll configure mail and logging settings next.

BroControl is used for managing Bro installations — starting and stopping the service, deploying Bro, and performing other management tasks. It is both a command line tool and an interactive shell.

If broctl is invoked with sudo /usr/local/bro/bin/broctl, it will launch the interactive shell:

You can exit the interactive shell with the exit command.

First, use broctl deploy to start Bro and ensure that files needed by BroControl and Bro are brought up-to-date based on the configurations in Step 4.

No problem, we simply modify /usr/share/bro/share/site/bro.local to include the following at the bottom of the file

Now restart bro, and all our log files should be in a JSON format ready for ingestion.

First we move our original wazuh filebeat configuration to a new direcotry conf.d.

Simply copy the instructions below:

then create our bro filebeat configuration in /etc/filebeat/conf.d/filebeat_bro.yml

and check your Kibana dashboard…

First you have to goto the managment panel, and click index patterns this will tell kibana about the location of your bro files like so: 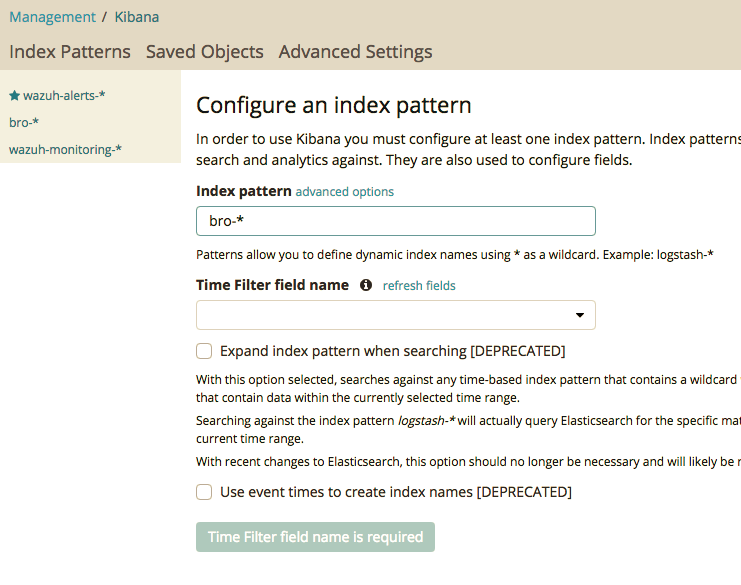 Then back to discover, and you should be seeing your bro logs!

Choose your Container, feeds and sensor. (See screenshot of feeds below)

Eventually, you will see an api code, copy this to your clipboard, or notepad.

Follow the client install instructions for the critical-stack-intel binary:

Then connect the binary to the feed with the api code (internet access required), and it should pull down the subscribed threat intelligence feeds.

We hope you have found this walkthrough informative and useful, and we hope you can follow these instructions with ease to create your own HIDS & NIDS monitoring system.